Vitellaria paradoxa (formerly Butyrospermum parkii), commonly known as shea tree, shi tree or vitellaria, is a tree of the Sapotaceae family. It is the only species in genus Vitellaria, and is indigenous to Africa. The shea fruit consists of a thin, tart, nutritious pulp that surrounds a relatively large, oil-rich seed from which Shea butter is extracted. – Wiki

The shea tree grows naturally in the wild in the dry savannah belt of West Africa from Senegal in the west to Sudan in the east, and onto the foothills of the Ethiopian highlands. In Nigeria, there are  21 shea nut/butter producing states – Niger, Kwara, Kebbi, Kaduna, Kogi, Benue, Ogun, Oyo , e.t.c.

It takes fifteen years before a Shea tree begins to fruit and about twenty five years before it is fully mature after which it will produce fruits for the next two centuries. It is capable of producing more than 25 to 50 kilograms of berries annually. It usually grows to an average height of about 15 meters and girths of about 175 meters with profuse branches and a thick waxy and deeply fissured bark that makes it fire resistant.

When it passes the germination stage in about three to five years becomes fire resistant. It is also not known to have natural enemies such as pests.

Once it survives the first five years of its early stages of germination and growth, it grows slowly and takes about 30 years to reach maturity and from here, it can live for up to three hundred years. In the absence of any hazards, including tree felling, it can bear fruit for two hundred years.

The shea tree has no capacity for vegetative regeneration, and therefore, can only be propagated through its seed.

Shea butter is extracted from the nuts of the shea tree (Vitellaria paradoxa) that is native to Africa, shea butter is a fatty oil that exists as a solid at room temperature.

The Karite tree bears the fruits, and the nuts inside the fruits are of prime importance. These nuts are crushed, boiled, and manipulated to extract a light-colored fat, which is commonly referred to as shea butter.

1. Boil the Shea fruit seeds to make it easier to break

2. Dry in the sun. The shell is removed and used for fuel.

3. The kernel is crushed, roasted and ground to a paste.

4. The Shea paste is churned by hand for about two hours to extract the Shea butter which is skimmed off, washed and cooled for sale in the markets. 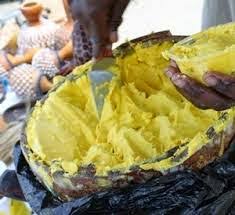 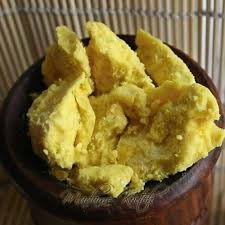 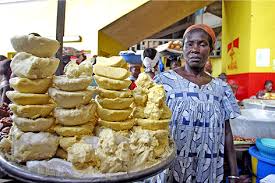 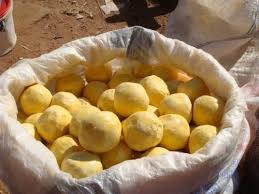 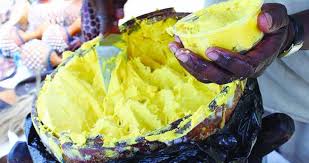 • Shea butter is known for its healing properties, which can be attributed to the presence of several fatty acids and plant sterols such as oleic, palmitic, stearic, and linolenic acids. These oil-soluble components do not undergo saponification or convert into soap on coming in contact with alkalis. Shea butter is more non-saponifiable than other nut oils and fats, thus imparting it great healing potential.

• Shea butter has several derivatives of cinnamic acid that exhibit anti-inflammatory properties. Generalized inflammations from conditions like dermatitis and rosacea can be alleviated by using shea butter on the affected area. Sunburns, rashes, cuts, and scrapes that can result in swelling can also be treated using this butter.

• Shea butter is considered as one of the best anti-aging agents for the skin. It stimulates the production of collagen, the youthful scaffolding protein in the skin. The vitamins A and E found in this butter keep the skin supple, nourished, and radiant. If used regularly, it reduces wrinkles and also prevents premature wrinkles and facial lines. Its anti-aging properties can also be attributed to its ability to increase circulation to the skin and promote cell renewal.

• Shea butter is often used as a base in ointments or creams prepared commercially for stretch mark treatment. This is because it can dramatically help prevent and reduce stretch marks formed during pregnancy due to weight gain and/or weight loss. These marks are formed when the skin stretches beyond its elastic capacity. The application of shea butter will restore the natural elasticity of the skin and also improve collagen production.

Shea butter is edible and is used by many people in Africa for food preparation. An unknown advantage of adding shea butter to your diet is its ability to lower cholesterol in the blood. This butter is rich in stearic acid, a type of saturated fatty acid that was shown to reduce lipoprotein and plasma cholesterol levels in a study published in the American Journal of Clinical Nutrition.